“I can’t believe I just got overtaken by a guy taking a f**king selfie.” 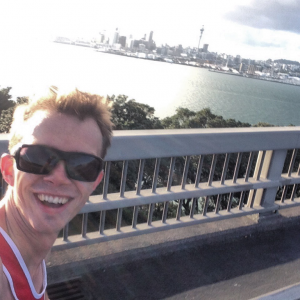 And with those words ringing in my ears, I summited the Auckland Harbour Bridge on the only day of the year it’s open to foot traffic. That was one of the highlights of a pretty special day. Starting with a couple of thousand others with the sun rising in the opening miles was another. But crossing the finish line of a marathon I’d only entered 8 weeks before, and barely had a week of training for, has to be top of the list.

If you read my last blog post, you’ll remember I set myself three targets for my finishing time – bronze, silver and gold. I narrowly missed out on the gold time by just a minute, meaning I finished the 42km in 3:25.54.

While it’s gutting to lose out to Booth (don’t worry, I’m coming for you), this race wasn’t really about the time, although it’s easy to say that now. I was able to take part in a once-in-a-lifetime race. I got a unique tour of Auckland, it’s beautiful suburbs, bays and beaches (although there is a bus that covers basically the same route). And I can now say I’ve done a marathon – something I didn’t even think about doing at the start of the year.

For stat fans out there, I managed to run a negative split by 40 seconds (meaning the second half marathon was faster than the first one). I also posted my fastest 5km between 25-30km. So for everyone who said “Don’t go out too fast”, I did actually listen to you! The wall was only really hit in the last 2km, which were through windy harbour district, with plenty of corners slowing me down. 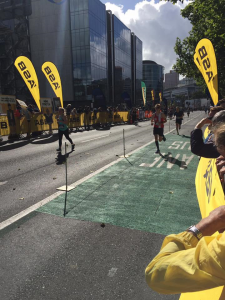 A big thank you must go out to Luke at Sports Lab for taping me up and getting me moving again after my lower back seized up in the days following the marathon. Now it’s on to the next challenge – the West Coaster in December, a trail marathon along the North Island’s west coast, much of it on the Hilary Trail, featuring over 2000m of vertical assent. I’ve got 6 weeks to train this time. What’s the worst that can happen?