Can you taper for a marathon if you’ve not really trained?

Do we have free will? Can you really experience anything objectively? And is it possible to taper for a marathon if you’ve not really trained? They’re all great philosophical questions of our time, but thankfully I’m only going to be dealing with one of them today.

It’s now less than 48 hours till I get to the start line (and hopefully the finish line) of my first marathon in Auckland. Having spent the previous few weeks travelling round Asia, there wasn’t a lot of opportunity to pound the pavements and make up the last minute miles. On the flip side, I was hiking a lot, most of it at altitude, so I was hoping that I would retain at least some amount of pre-travel fitness.

Landing in New Zealand last Wednesday, I decided to get a measure of my fitness level. Helpfully, on Thursday there was a 10km race in Auckland Domain, a beautiful park near the centre that also houses the Auckland Museum. I could combine sightseeing and racing! The route itself was a bumpy 3 laps, past duck ponds, the grand entrance to the museum, although it avoided a route ominously-named ‘Lovers Path’.

With 3km and 6km races starting at the same time, it was a little difficult to find a pace in the early stages. But after the field cleared out, I wound up in second place (out of a field of 30) in a time of 40:00.4. Not too bad considering I’d only stepped off a plane 24 hours before!

Next up was trying out my new local parkrun on Saturday at Western Springs. Another three laps, this time sticking next to the lake, and involving dodging much local wildlife – including actual kiwi birds! As a side note, they’re pretty slow and lumbering, so don’t expect them to help themselves. This time, a third place out of 80 in 19:03 confirmed that while I’m not quite back in the ‘chasing down Scott Watson’ zone, there’s still some zip left in the old legs.

After tacking on some extra miles (including a beach detour) and a quick hill session, I’d managed 45km in 4 days. Off a base ‘not very much’, I’ve decided not to risk any more runs, and instead settle for some gentle hikes through the hills and along the beaches that surround Auckland. 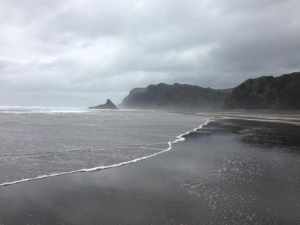 And that brings us to today. As I sit here now, I’m setting out my goals for the marathon. Obviously the first order of business is to get to the start line for the 6am kickoff on time! After that, I’ve gone for a bronze-silver-gold target setting method: