I seem to have become a bit of a trail runner in recent months – if there aren’t hills, mud and a bit of a scramble then i don’t seem to be interested…this is what can happen with that attitude to running…!

In early September 2017 i somehow found myself in Sweden, almost but thankfully not quite camping!

Delicious food and as much of it as i could possibly eat, hot showers, a sauna, sea views, yoga, coffee tasting, boat rides, and people from all over the world….and included in the package were 3 challenging trail runs…!

14 miles run today mostly over rocks by the coast. Pretty villages with wooden cottages and red roofs. More rocks. Some pine woodland and a few bogs, and even more rocks.  Amazing and breathtaking.

Another glorious day on the west coast of Sweden, starting with another great breakfast (algae smoothie seems to be the in thing here!)  The sun was out all day giving more glorious coastal views from the rocky outcrop trails.
The terrain was difficult, hilly, steep rocks, roots and narrow footpaths (if they could be called that) in the woodland.
Having to concentrate on the terrain and the navigation (pink tape on branches, gates and wooden posts) didn’t allow any time to ‘switch off’ at all.  And all of this for 17.8 miles and over 3.5 hours!

I think that was the hardest run i have ever done, made harder by the 14 miles the day before!
Day 3

Started with a boat trip to the village on the mainland and then all i had to was run the 13.9 miles back to camp! (A swing bridge, not a swim back onto the island thankfully!)
Another beautiful day and this time not so many rocks! Through forests, fields, along the coast and lake shores, through a gorge and over some rocks (….there had to be some!)
Hard work running the trails and distances on 3 consecutive days, but nothing i have done compares.  Concentration required again but not as tricky as day 2.
Drummers could be heard in the distance with just over a mile to go which helped keep me going….onto the beach (soft sand!) for about 150m and then finally over the line!
45.7 miles altogether….! 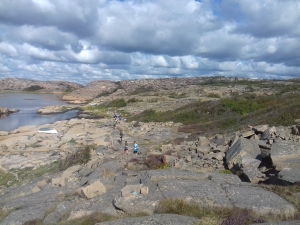 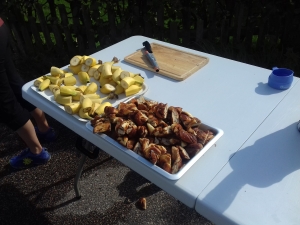 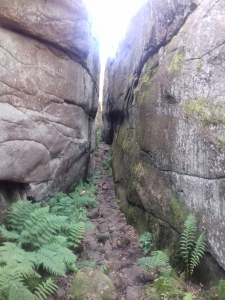