On a distinctly autumnal afternoon, twenty intrepid Harriers met at Leeds-Bradford airport for a weekend sojourn to the Rhine valley. After a short flight to Dusseldorf, we caught the train to our destination, Cologne. A special mention here should go to the designer of the ticket machine at Dusseldorf airport station, who has created a system seemingly perfectly designed to befuddle a weary non-German-speaking traveller. A shout-out also to the conductor on our train who, upon realising that she had stumbled upon a large group of English tourists, half of whom had the wrong tickets, sighed deeply and then let us get away with it with only a mild rebuke…

The city’s famous cathedral is one of the first sights that greets you upon exiting Cologne central station – even on a dark and drizzly evening, it was pretty spectacular. Our home for the weekend was the Station Hostel, very close to the station and right in the heart of the city. Upon checking in, we took up residence in the hostel bar and had the first of many German beers. The hostel was clean, pretty comfortable, ideally located and had an excellent bar/cafe area on the ground floor, with free breakfast – exactly what we needed.

Saturday was the ideal day for getting our bearings and seeing some sights. Apparently, I am unable to accept it is the weekend without doing a 5K run on a Saturday morning, so I set off in the pouring rain for an unofficial “parkrun” to the west of the city centre. The park (Innerer Grungurtel) was great – not dissimilar from our own Woodhouse Moor – and, if the organisers of a future German parkrun happen to read this, I would highly recommend it as a venue!

Our main task for the day was to collect our race numbers and timing chips from the Marathon Expo at the Lanxess Arena, located across the Rhine (the bridges being covered in padlocks left by tourists from around the world) to the east side of the city. The Expo was impressive – a huge variety of stalls and exhibits with everything a runner might (and might not) need (although I’m sure we’re all agreed that buying a new pair of shoes the day before running a marathon would be the smartest idea!). Of particular note were the apples embossed with the marathon logo – surely the healthiest and coolest of all the merchandise on offer. The rest of the day was spent exploring the Expo, sight-seeing and dodging the rain before we reconvened in the evening for a quiet beer to prepare for our respective races the next day.

It was an early start for the half-marathon runners (Kay, Trevor, Sara, Tana, George, Dan, James, Paul S, Paul D, Becky, Matty, Liz and myself) and for those who came to see us en route (Chris and Farhad) – a race start of 8.30am on the other side of the river necessitated early breakfast and then a very cold, pre-dawn walk across the Rhine bridge. The start area was already filled with thousands of people and, as always, not enough toilets! Fortunately, we were all ready in time and, in a blast of confetti and AC/DC, we were off!

The start was pretty heavily-congested – I spent most of the first kilometer weaving and dodging through the crowd – although the starts were staggered into eight pens based on estimated times, which helped. The route began by crossing the river back into the centre and then curved and looped through much of the city, including the university district and through some residential areas. The atmosphere was excellent – despite it being early on a Sunday, there were a decent number of people on the streets to cheer us on and several groups providing musical support (my particular favourite being the chap singing German power ballads around mile 5). Most of the roads were wide, very flat and well-surfaced and this, combined with mild temperatures, no rain and little wind, made for pretty much ideal running conditions.

For once, I found my pacing reasonably consistent at around 4.08/km – I managed to resist my usual urge to sprint the first 5K and collapse at mile 9… The race seemed to go past very quickly and before I knew it, I was approaching the final kilometer, where the course approached Neumarkt and Schildergasse, the main shopping streets. A friendly shout from Farhad spurred me on and I threw myself down the final 200m in the shadow of the cathedral, with a new PB as my reward.

I knew that the marathon runners would be starting around 10am and that their route initially took them away from the city centre for around 10K before re-joining the half-marathon route. I had hoped that this might give me time to get showered and changed before heading back to the centre to cheer them on and, with this in mind, made the fatal error of looking for the swiftest route back to the hostel from the finish line. Unfortunately, said swiftest route involved ducking through a gap in the finishing funnel and accidentally missing the finishers’ medals, the timing-chip collectors and several hundred meters of food stalls, free drinks, etc, etc… D’oh!

I realised my mistake on my way back to the course, where I began to notice tired-but-happy looking people with nice shiny medals… I had also missed the opportunity to spot the marathon runners on their way through the city centre! However, I found a good spot on the terraces near the finish in time to see Sara, Tana, Kay,Trevor and Liz finish their races. Everyone seemed to have enjoyed the race and there were many excellent times and some great new PBs – well done everyone!

The event had a decent app allowing you to track runners based on their times across mats around the course – this was really helpful in seeing how our five marathon runners (Adam, Jack, Nicola, Phil and Naomi) were getting on. Jack and Adam had set off strongly and were extremely consistent, even picking up the pace as they entered the second half. Both finished well under 3:30 and were followed not too long after by Nicola, who set an amazing time of just over 3:45. Hyde Park Harriers’ Mr Marathon (Phil) appeared bang on schedule, completing his 155th(!!!) marathon. Naomi was about half an hour (and 154 marathons) behind but finished her first-ever marathon strongly (and promptly made us promise not to let her do another one (for a while at least…))!

We reconvened at the hostel bar for some hard-earned beers before heading out for dinner at a traditional German beer hall. Much beer was drunk (“…bier? …bier? …bier?”) and many schnitzels and bratwurst eaten. The hardcore then carried on into the early hours, returning in the morning with tales of Tabasco shots, mistaken trams and debauchery.

Monday found us all feeling a little tired and the rain had also returned. Most of the group took the opportunity to take in some more sights of the city (some even braving the 550+ steps to the top of the cathedral!) and seeking out more beer and food. By the evening we were making our way back to Dusseldorf and then home (despite the best efforts of slightly confused check-in attendant…), exhausted but having had a great weekend!

Congratulations to all our runners – it was an excellent trip with some fantastic running and it was a lot of fun hanging out with you all! Special thanks to Farhad and Chris for their support and photos around the course and particularly to Paul Sawyer for organising everything brilliantly – it was hugely appreciated!

I’m already looking forward to the next trip and I’d highly recommend Cologne to any Harriers who fancy running a marathon or half somewhere a little different next year! 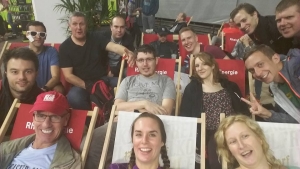 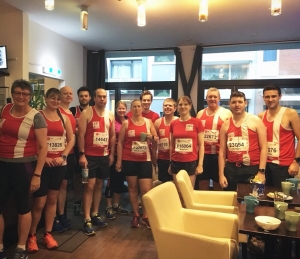 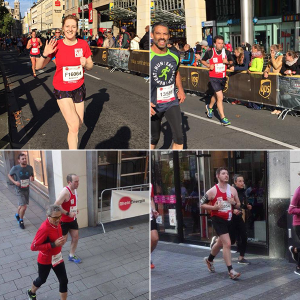 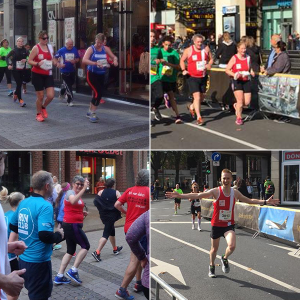 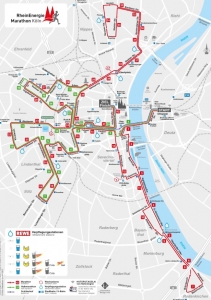 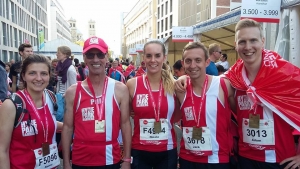