First of all I’d like to say a huge thank you too all of those involved in the seamless running of the club. Richard for getting everyone registered and everyone involved back in December and Phil for organising race 2 of the series. Your efforts do not go unnoticed but can never get enough praise so thank you.

Right, Alec here your 2016-2017 Men’s Cross Country Captain I’m not much of a speaker or writer but here we go. Following on from the men’s great escape from relegation that looked like it could be on the cards around Christmas time I found myself finishing 6th in the individual league. This was enough for me to be called up to run for Team PECO as someone had dropped out that week. I only found out on the Thursday 3 days before the relays!

The relays were held at Northowram cricket club which is between Bradford and Halifax. Two things crossed my mind as I drove into the edge of the Calder Valley on the M62. 1) I really do love this part of the world. 2) Hills. The amount and gradient of hills!

Once I arrived I met my teammates; League winner Ali Burns (Valley Striders) and 2nd place Lee Athersmith. Both incredibly fast runners which I was rather nervous about running with but they were both really friendly and we had a few jokes before having a team warm up. We agreed that Lee would run the 1st leg, myself the 2nd (which I was very pleased to do so) and allow the glory leg to be run by Ali.

The course was much more of a fell race than a cross country. Only 2.7 miles but with 400ft of climbing over some very steep climbs and descents. Starting with a very fast downhill but ending with a ¾ of a mile long climb it wasn’t going to be easy. 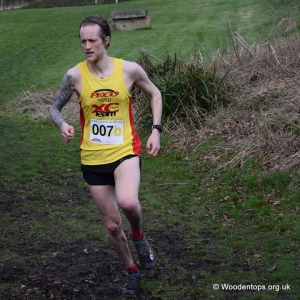 Lee ran a fantastic first leg, he tagged me at the changeover point with a good 10 second lead. At this point there was only one thing on my mind, start in first finish in first. About halfway through I could hear footsteps splashing behind me only to see it was the PECO V40 team runner Paul Millgate (Wetherby) who I’ve had some good battles with this season. Luckily I managed to drop him on the last climb to hand over to Ali who ran a superb Glory leg to wrap up a victory for team PECO.

Infact out of the 6 categories PECO managed to win ALL 6! Which we were all very pleased with seeing as the opposite results happened last year!

Running in the end of season relays was a huge highlight to this year’s XC season. It seemed like a bit of joke to myself that I would aim to make the team in November and I know I was lucky as other people couldn’t run, but it made me extremely proud to be the first HPH runner for team PECO. Hopefully next season we can get out strong teams for all 5 races and like the Ladies team did this year we can enjoy some success!