While my personal running has gone from strength to strength, there has been a contrasting undercurrent of failure. Just like a duck on a pond – on top everything was going smoothly, but underneath the ducks legs were in serious danger of requiring amputation. After two out of five races of our local cross country league, the Hyde Park Harriers mens team were sitting seventh out of seventh, with two teams to get relegated. To rub our noses in it even more, the ladies team had won both of the races in their division, and were sitting clear on top.

After coming sixth and seventh in the first two races, we sat on thirteen points, four points adrift of safety at Christmas, it was going to take a serious effort from all of us to just stay up. Having not been able to attend either of the first two races, due to the wedding of the year, I felt a big responsibility to make a big effort for the club for the rest of the league. We have developed a really strong bunch of runners in our fastest group – group 8 – over the past year, and know we needed to show what we could do. Conversations went back and forth between myself and our cross country captain, and we drew up a spreadsheet (titled ‘mission don’t get relegated’) of fifteen or so of our top runners who we thought could challenge and score some serious points. The register went round, and in the weeks running up to the next race people who were on the fence were talked into attending, on group runs and speedwork just as much as on Facebook.

Cross country scoring is fairly simple. In this league, eight men score, and it is based on your position in the race. So if you finish first you score one point, twenty-third scores you twenty-three points. The aim of the game is to score the least total points as a team. There are two complicating points. Firstly the race is organised into leagues with runners from different leagues competing in the same race, so a runner finishing ahead could make your score worse whilst the points that they score are for a team that is not going to affect your team position. Secondly although the first eight runners for a team are the only ones that score, all of the other runners affect other runners positions – so I could finish as the eighth runner for my team and score for example 38 points, and although the next two hundred runners across the line don’t score any points because they are the ninth or more runners to finish for their teams, the next scoring runner would score 239 points – so every finisher makes a real difference.

Having assembled a strong team – looking around I could see at least ten people that were top runners for us, and on their day could finish as one of our top three runners. With several of our runners having taken part in the University of Leeds XC Relays, and the Leeds Varsity on some of the same route, we looked in good shape. 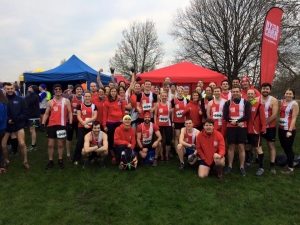 As ever with the PECO cross country league meets the field was huge. The bunch of us runners from group 8 that we hoped would do the business ran over to the start line, and the huge massed field. We bunched together towards the front on the right side of the start line, exchanging pats on the shoulders and messages of good luck. We were assembled there for one reason – to run hard and drag the club out of the mire. As a group it’s fair to say we were pretty motivated. 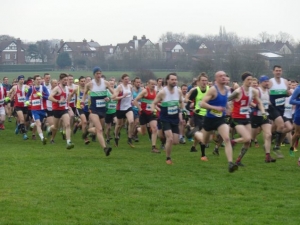 This PECO was on the longer side – 5.5 miles is obviously at the top end of the 4.5 – 5.5 mile range, although having run the Yorkshire XC Champs several of our runners (including me) were used to the distance. Setting off I saw Alec striding off into the lead, a large bunch of Valley Striders and Wharfedale Harriers, but apart from that I was sure that the Hyde Park Harrier vests were well represented. I was running alongside Mike Vargas who I had raced from gun to line at the Yorkshire Champs, and it looked like we were set to do so again. 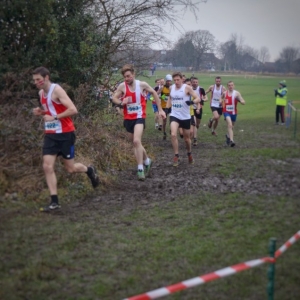 The course was incredibly muddy, especially on the corners, which was a shock to the system with the dry conditions at the previous Yorkshire Champs, relays and Varsity. The race started with one lap of West Park fields, and then headed out through some woods and then into Beckett Park. At this point myself and Mike were still neck and neck, with Alec some way ahead. It was all looking good – if we could have successive runners coming in one after the other we would be on for a strong points finish.

The course was challenging due to the mud, but also a few short sharp muddy climbs through the woods. Beckett Park had a small ‘out and back’ through another section of woods, and it was here that I broke ahead of Mike. I was still running strong, the effort felt sustainable, and apart from a fresh bunch of Valley Striders that came past as we headed across the final bit of Beckett Park before the woods heading back to the starting fields, I didn’t feel as though we were about to be swamped.

The finish to this race was a tough slog – not because the course was tough or I became tired, but just because there was still a mile to go, and rather than heading on a straight line towards the finish it trailed around the perimeter of the park and around the football pitches before heading for home. I still had the Valley Striders that had passed me in sight, not because I though I could catch them but just to try to push hard, but I soon realised I’d need to be pushing even harder. As I finally got on to the run in to the line, with maybe 600 metres to go, there was a Wharfedale Harrier closing in behind me. I opened my legs and pushed as hard as I could. Unlike at the Yorkshires, I had some effort to push and to push again, hoping it would be enough…

On the line, I thought I had just kept him behind me, but I would have to wait for the final results to see. Crossing the line I was gasping with hands on knees from the effort, and was still drawing breath as I saw Mike, closely followed by George in a sprint finish, coming in to be our third and fourth scorers (with Alec having finished first), and then the nerves started to kick in as we started counting runners in – Angus in fifth, then Jimmy in sixth and Scott in seventh. There was a slightly longer wait for our eighth runner and the nerves really started jangling before Ben crossed the line. The atmosphere at the finish line was excited but nervous. It looked good, our runners had run well and we had people across the line high up and in numbers, but would it be enough?

When the results came out – disappointment. Although I had been credited with the same time as the fast finishing Wharfedale Harrier, he had been given the position ahead of me as we finished shoulder to shoulder. However, this was outshone by the team results – second! With Wharfedale Harriers in the league below us which I had forgotten, only Valley Striders had beaten us. In fact we had beaten the team in the first safe position by over 300 individual runner placings, which would come into play in the case of a draw and ‘countback’ is needed to seperate teams.

Rarely in running are you really competing as part of a team, and it was a great feeling to be able to pull that off. As we were all sprinting across the final part of the field, it really felt as if we were running for the survival of the club. Maybe that’s a bit melodramatic, but it was do or die for our chances of PECO survival, and now we can start looking up rather than down!