Back in March this year Alan and I booked our first holiday together.  I had always wanted to visit Mexico and see Chichen Itza and perhaps add in a Caribbean Island as well, so we booked a trip to Mexico and then Cuba.  We also somewhat reluctantly booked onto the Abbey Dash again this year a few weeks ago as it’s part of my run club’s “road” calendar – I do quite like the race, but I get a bit bored/fed-up/irritated that it costs around £24 to run up and down Kirkstall Road, even if the atmosphere is usually really fun and it’s great for PB Potential and I’m still chasing my sub 45 minute time for a 10K.

So how did we end up in Spain today running an untimed 5K colour run?  Unfortunately we found out less than 2 weeks ago that Alan’s Mum who lives in Spain needed an urgent operation.  As a self employed miniaturist, she would miss out on being able to go to an important fair in Madrid if her husband Frank was looking after her after the operation.  The best solution was for Alan to fly out the day Frank was to set off for the fair and look after her.  The only slight issue was that the dates fell exactly before we were due to go away and so we are ending up visiting 3 Spanish speaking countries in 3 weeks and having more time away from work that anticipated.

We both drove down to my parents in Surrey and then flew from Gatwick to Seville where we picked up a cute Fiat 500 in a jazzy red colour and drove just over an hour to Rio Tinto Hospital which is set next to a mining area and is fairly rural in location.  Fortunately Alan`s mum Angie was in good spirits and was recovering well.  We spent most of our time at the hospital with Angie for the first 3 days and she was discharged around lunchtime on the Saturday.  Unlike England they don`t have set visiting hours so we were able to stay with her for most of the time and try to keep her amused as well as run errands for her like getting cups of tea and conditioner.  I found it interesting to try and pick up some Spanish as I have never studied it at all and did German and French at GCSE and then French A-Level…but that was all 18 years ago!  In Rio Tinto and the smaller village where Angie lives of Campo Frio there are very few English speakers, so I had to learn how to order Coffee and orange juice to give Alan a break.

Alan & I are still training for another marathon which is only the weekend after we return and should be flat, but challenging as it goes along the canal, but with only 50 entrants I suspect there won`t be too many water stations!  We were keen to keep up the training, but the last time I managed to get in a run was at Bradford 10K as I`d had a few late nights at work getting ready for being on holiday.  Alan had researched potential races in Spain and the only one that was in a reasonable distance was a 5K “The Color Run” so we entered in the hope that Angie would be well enough to either watch us or at least be ok at home for a few hours.  In the end on the Sunday she wasn’t quite well enough to come with us, but had a restful few hours whilst we were at the race.  We were definitely overdue a run – I can’t go more than a few days without feeling really twitchy that I’ve not been out for a run!

We set off before dawn to drive to the start of the race (slightly annoyingly we’d had to pick up our race numbers from a Skoda dealership the day before which was a bit of a faff.) and initially went to the wrong location, before realising that we needed to get to the start which was at the Olympic Stadium.  We were in the first wave at 9am as the later waves had all sold out so we were there really early and managed to park with no issues and visit the toilets before we got in the start pen.  We were wearing our “The Color Run” t-shirts and headbands and we noticed that everyone was also wearing their green mini rucksack bags, so we grabbed them from the car and got ready to run. 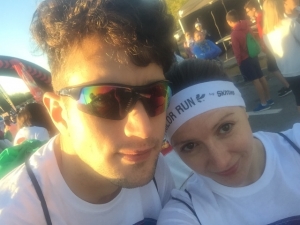 There were loads of groups wearing various colourful additions to their costumes like wigs, stripey socks and tutus, groups of children and general lots of excitement!  We moved from the start pen to stand near the start in front of the stage where a lady was revving up the crowd in Spanish – I had no hope of understanding it…but for some reason we were told to run backwards when we started.

There was a countdown (in Spanish) and we were off!  There was a lot of tripping over with the running backwards and we were quite far back from the start and so it took us a while to be able to actually get to a position where we could “run” and we weaved our way around various groups of people jogging and walking.  At 1K we hit the first colour station and got covered in blue powder (I cursed the fact I’d forgotten my sun glasses!) and the people in front of us had massively thinned out.  We were at a comfortable “parkrun” pace and overtaking most of the other people who were mostly ambling along and enjoying the experience.  One thing that was rather annoying was the green rucksack bag flapping around me.  At about 2K we hit the second colour station and were covered in pink powder (the powder didn’t taste as nice as it did at Color me Rad that I ran last year!) we overtook a small group of children who appeared to be taking it seriously and then by around 3K we realised that there were only a few people ahead of us and we could see the pacer car within the very near distance.  In fact I saw the pacer car passenger get covered in paint by a mischievous volunteer!

By the time we’d gone through the 4th colour station which I think was orange I said to Alan that if he wanted to go for it he should and he caught up with the lead group of 3 Spanish lads who were pushing each other on and giving it a good effort and then pushed on up to the pacer car.  I could see him in front and people were cheering him on from the out and back section saying  “está primero!” and he was clapping them on.  He ran on with a sprint finish to the end and crossed the finish line first and I followed about 30 seconds later in 5th place.  I’m not sure how much of a real “race” it was, but it was certainly fun to be at the head of the pack – not something that either of us have done much in the past at all and Alan was delighted to have the experience of being first over the line.

Of course there was no prize and no time as it wasn’t that sort of race, but we got to enjoy walking around the festival at the end and picked up a few freebies like some skittles and some photos.  We went to the stage and waited for it to get a bit busier and then enjoyed throwing pain powder around and dancing to music – interesting experience when completely sober on a Sunday morning as the sun started to pick up. 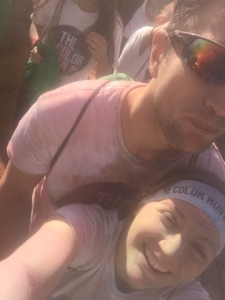 It wasn’t quite the Abbey Dash, it wasn’t quite the long run we should have done for our marathon training, but it was a fun way to get some exercise in before we left Spain and gave Alan the first finisher experience.  And as the announcer at the start claimed…it was a very happy 5K!