Posted By: Richard Edwards |Posted In: Hyde Park Harriers - Abroad , Races | 13th September 2017 | No Comment
When, a couple of months ago, a friend of mine who lives in Denmark suggested we meet in Sweden to run an ultra marathon along a famous Swedish cross country skiing route, I could barely contain my excitement. Thankfully, there were no other races in the calendar for that weekend and it tied in quite nicely for, what turns out to be my very minimal and mostly beer-focused, lead-up to a couple of Autumn marathons.
Flights were cheap, car hire was cheap, the race was on a Saturday giving plenty to time to get back to Stockholm on the Sunday to fly back and get to work. It was a done deal.
When, 2 weeks before the race, said friend messaged to say she had been too lazy to train and wouldn’t be joining me in the race but would be there to cheer me at the finish line; I wasn’t too worried. Running alone is one of my favourite things and it took pressure off both of us with regard to waiting around and pacing etc.
After a late arrival on Thursday evening into Stockholm and a couple of beers at a local bar, we explored Stockholm on the Friday morning in search of cinnamon swirls and coffee. Saving my legs a little, we only clocked up 25,000 (!!!) steps exploring the city then hopped into the car for the picturesque 5 hour drive to Mora, in the middle of Sweden, where the race’s office and finish line was. Race number pick up was slick and we were soon away to explore the town. Mora is the finish line for all of the Vasaloppet events (http://www.vasaloppet.se/en/) which run a summer and a winter programme. The winter focuses on cross-country skiing, and the summer on running and cycling; culminating in the Ultravasan races: a 90km, a 45km and a relay.
The route follows a path of historical significance (more here: http://www.vasaloppet.se/en/about-us/history/) for Swedes, and is a series of forest roads, gravel tracks and, when it has been raining constantly for 6 hours, HUGE puddles. It’s an out and back route, so we hopped on buses from Mora at 7:30am for the 9am start time. Having opted for the 45km route, at the start we were shown videos of the 90km runners who had started at 6:00am and were already hot on our heels when we started.
The first 15km before the checkpoint back in Oxberg passed by in a flash. The morning’s drizzle cleared and a mist was forming beautifully around the trees and heather. Lakes to the sides of us and river crossings made for very pleasant running conditions and the field slowly started to spread out so there was only really ever 2 or 3 people in my sightline. My plan was to maintain a fairly slow pace to start as I knew the first 30km was hilly, and the last 15km was mostly down so I’d use what energy I had then to make some time back if I could. The aid stations were brilliant stocked (4 in total of the 45km) with fruit, pastilles, water, sports drink, energy gels and even a massage table! There was a tannoy at each, too, which was always a boost as they seemed to enjoy welcoming the foreigner – shouts of ‘Welcome Amy Young from Leeds’ gave me that needed bit of energy. The first 30km passed quickly, and I was relatively unscathed apart from a muddy bottom where I fell trying to take a selfie and VERY puddly shoes from the vast amounts of water on the tracks.
The penultimate checkpoint was at Hokberg, with 18km to go. I had a quick drink and the rain started. It POURED for about an hour then, which made life not only quite soggy but wasn’t great for the spirits. The route had started to get a little boring too, to it’s amazing standards, and was just a track through a forest with mostly puddles the whole way. Thankfully, Volvo, of all people, were there to save the day. Each of the race sponsors had their own 100m stretch of the route to do with what they wished. DHL used theirs to provide some incredible cheering and music; Asics can only have provide can be described of 100m of uphill puddles and Volvo surpassed everyone by creating a forest boardwalk with a triggered camera which videoed you running through arches of foliage and sent you an email with the link to watch when you’d finished. What an incredible souvenir of a great race.
The final 9km after the last checkpoint was a bit of a mental battle for me – but I knew I was on track to achieve under 4:15 which was my target. I plodded (or squelched) on as the course headed downhill into the town of Mora and the sun started to shine. I managed a final sprint to the finish line (gaining 2 places) and finished in a gun time of 4:05:46 – 22nd woman.
A fantastic medal, a beautiful (fitted!) technical t-shirt and a hug from Maddie (who had walked 20km in the rain) made my finish amazing and we sat to watch the other finishers passing under the arch. The 6th place 90km runner came in around the same time as me, which was great to see, and a number of the relay contestants sped through.
A great race in a fantastic part of an even more incredible country – I love run tourism!!! 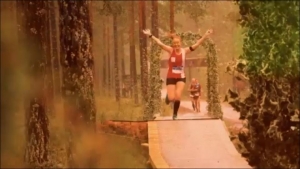 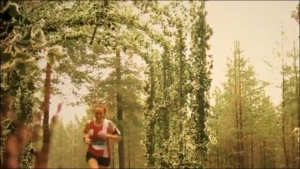 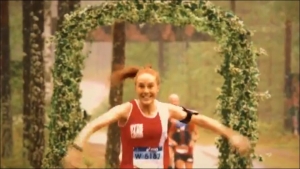