Despite some early season fixture congestion, 9 Hyde Park Harriers tackled the 40th Chevin Fell Race.  Only £4 to enter on the day, this race has been a staple of the HPH Fell Championships since 2012.  Less than 5km in distance, the tricky bit is getting up the 200m hill within the first 2km. Runners then get the chance to pose for a few photographs and catch their breath, before a steep descent back to the finish. 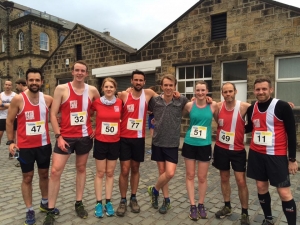 With temperatures much cooler than last year, 5 of our runners ran Chevin pb’s, whilst 3 were running it for the first time.  Scott continued his ‘going out hard’ strategy, with Tom and Jimmy chasing him up Johnny Lane.  After running strongly in the Ilkley Trail race 2 days before, Scott finished as top Harrier again- 19th overall, and grabbing the 4th fastest HPH time for this fell race.

2016 Fell Champion Rebecca managed to hold off another strong downhill finish from Robin, to finish as first HPH lady, and take 55 seconds off her time from last year.  Excellent HPH debut fell performances from Matt and Jo rounded off a tough but enjoyable evening for our runners.

With the Oxenhope Fell Race now confirmed for the 16th July, the next race in the series is the Baildon Carnival Canter on the 9th July.  Full results available here.