Ten Hyde Park Harriers made the short trip up to Addingham for the latest round in the Fell Championship: Beamsley Beacon. A serious crash on the A65 had myself and Paul (who had kindly picked me up from work so I could race) sweating that we would miss the start but in the end we got there with plenty of time to spare and the subsequent 15 minute delay to the start of the race was well received as we caught up with the eight other Harriers. I have been extremely excited for a long time about racing on the fells for the club as it’s really my first love when it comes to running and I feel like I’m much more comfortable at home on the fell than on the roads. My day at work consisted of plenty of excited bouncing around and the odd extra cup of tea with a few more custard creams for vital hydration and pre-race fuel. I even exploited my running of the Year 3 and 4 cross country club to make sure I got an extensive pre-race stretching regime with some good drills in – I was really up for it and the nervous wait in the car as we hit traffic and obstacles only heightened the anticipation. The evening before I had looked at previous results and decided that a good target would be to try and get under 40 minutes for the course – running watchless I had no way of tracking this but it was something in the back of my mind as a good gauge of fitness.

The race route itself was mostly a straight forward affair from what I’d heard in the previous days from browsing forums and the FRA page, with the exception of some murmurings about a shortcut on the descent worth up to three minutes. It combined all the great aspects of traditional Yorkshire fell racing – runnable climbs, technical descents and route choice – with some really fast trails and roads leading out and back to the fell. I particularly enjoyed the ascent as I managed to get into a good little group and we worked our way up the hill steadily overtaking people all the way. I was trying to judge my effort by keeping a couple of runners I knew in my sights, they were about 30 metres clear of me and I held that gap solidly for most of the climb. I died a little about 3 minutes from the top but managed to grind out a lower gear and just about get there in a decent place – I reckoned I was about 15th.

The descent was all about trying to find the ‘Golden Ticket’ of the shortcut. I’d heard that it was a twisty technical run through an easy to miss ginnel. At the top of the climb I could just about see a Wharfedale vest disappearing into the distance so unashamedly I hung back and waited for an Ilkley vest to come past me and he confirmed that he could indeed show me the way. We managed to get past a Wharfedale runner just off the summit and then plunged down the technical descent. I’d said that I wouldn’t just follow him then sprint him at the end but I very quickly realised that his descending skills on the rough stuff were far better than mine and once he’d duly shown me the way he disappeared off into the distance.

The run down to the finish was a fast affair back through the fields. There was one little sting in the tail – a footbridge and climb up some switch-backing stairs back up onto the road. I managed to slog it up the last uphill realising that I was in a no-mans-land, the runner ahead was too far gone and the runner behind me was considerably far away. I kept pushing the pace all the way back along the road as I felt really happy with my run and when I finally made the last push over the line (just a street corner outside a pub – you have to love fell racing) I was told I’d finished 13th and in 39.14. I was ecstatic and bounced around more avidly than even before the race.

I then jogged down the road to watch all the fellow Harriers finish. Jimmy defied the sleepless nights and lack of miles to come in second Harrier, then Scott (who had taken a wrong turn when trying to find the ginnel) came in just ahead of Robin who had a storming run for 11th lady. Jonathan Mason was in not long after looking incredibly fresh. Andrew Mitchell was next in just a shade over 55 minutes. Two Harriers stormed through in under an hour with Richard Edwards and Paul Dickens finishing in quick succession. Rick Pullan followed a couple of minutes later and then Dote Stone, having made a navigational error, came in to complete a successful outing of all 10 Harriers to the top of Beamsley Beacon and back.

A quick drink in the pub with an inspirational tale from Dote about her recent fell exploits in the Lakes (I need to try that Buttermere Horseshoe route) and then it was back to Hyde Park to pack for my Paddy Buckley adventures with Steve Rhodes and company! It truly was an awesome start to an incredible weekend. 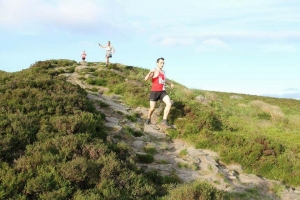 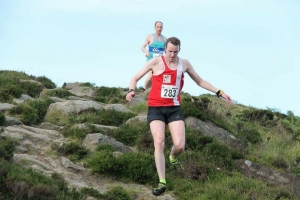 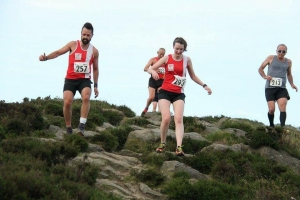 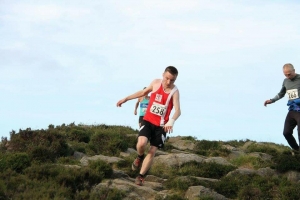 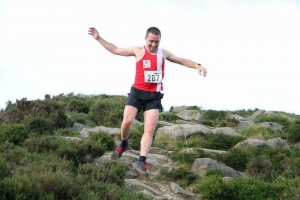 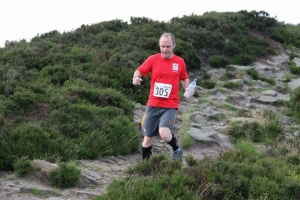 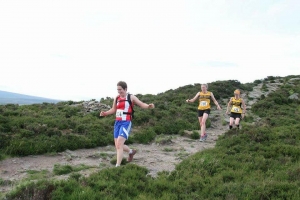 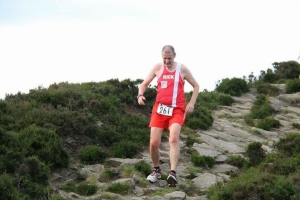