102 teams took part in this years Calderdale Way Relay, racing around the post-industrial wilderness of the Calder Valley.  HPH entering for the 6th consecutive year, had 3 teams representing the club in an 80km relay loop around the district.

The results have just been published by Halifax Harriers, and show the growing strength of Hyde Park Harriers away from our traditional road running origins.  36 runners took part, 17 attempting the race for the first time, and 4 stepping in as reserves at the last minute to replace the injured (and one transfer/defection to Valley Striders).

The race also puts us up against some great fell running teams and runners, who train and compete on the fells, and win races on a regular basis.  I think it’s fair to say that we made our presence felt once again in Britains biggest club off-road event, with an impressive all-round team performance.  Well done, and thanks to everyone who raced, provided lifts, and gave up weekend time to get out to Calderdale and recce their route. 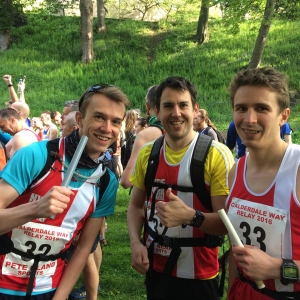 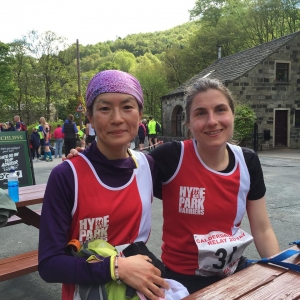 Graeme, Tom, Oliver, George, Maika, and Kasia started each of the HPH teams off at 8am, climbing up to Norwood Moor, before many of the later leg runners had got out of bed.  Maika, running her first ever fell race, joined the HPH ladies team with less than a weeks notice, and partnered Kasia for the 17km run between West Vale and Cragg Vale.

A stile injury to Oliver at the halfway stage didn’t slow up the C team too much, who completed the leg in 26th place, whilst Graeme and Tom were the first unlucky victims of the tight CWR cut-off times, missing out on the baton handover by 39 seconds.

All three teams on the second leg, pushed HPH further up the race rankings, with Tom and Aron powering up the long drag to Withins Clough, around Stoodley Pike, and in to Todmorden, finishing the leg in 1:18:22.  Caroline and Robin, took 10 minutes off the best HPH ladies time for the leg, finishing in 1:23.01.  HPH Fell Champion Dan Cross and David Driver smashed the HPH club record for this leg with a very impressive 1:00:50, pushing the C team into 14th spot, and sacrificing a full layer of skin from Davids heel so that Dan could claim the Strava course record for leg 2. The leg with the “big hill” and the wallabies, was an opportunity for Farhad to test his award winning calf muscles against 331m of elevation.  Whilst Gary was climbing the hill, no doubt considering how it was possible to lose your race map twice in one morning, Farhad got a few snaps of the Calderdale countryside (and the other runners).

The B team ran a great leg, and broke into the top half of the CWR race rankings, now in 51st place.  Catherine and Sarah, weren’t too far behind, setting a new ladies best time of 1:16 for leg 3.

The C team, continued their good form, making up 3 more places in the race rankings, and setting a new HPH mens record…getting to the coffee and biscuit stall at Blackshaw Head early, and enabling Jimmy and Mike to replace all expended energy with custard creams and bourbons.

As I’ve repeatedly tried to tell Phil Goose- this is a really tough leg.  It’s long, has lots of complicated moor bits, and has 480m of elevation to contend with.  Leg 4 loops around Hebden Bridge, through Heptonstall and Pecket Well, before a climb upto Wainstalls (with the bonus of superb pie and peas at the The Delvers pub at the finish).  With the temperature soaring, Monica and Rebecca ran a brilliant race and managed to chase down the B team, and complete the leg in 49th place.  Moving the baton onto the Leg 5 runners- Tim dragged Colin around Midgely Moor, as the C team took 3 minutes off last years leg time, and Jonny and John finished the leg in 1:47. Dan Waas wins the award for the worst recce of the year (so far)- getting to the start through rush hour traffic, and then having to drive back to pick up his car from a car park that was about to close in Shelf (thanks to Stainland Lions for the tip off!)  Luckily, Shane had been out in advance, and got the B team round in one piece.

Running again with Chris Mann, birthday runner Anthony, received a “wee massage” to enable him to overcome a Park Run injury and pull the C team back to 14th place.  The ladies team followed behind, with first time CWR runner Rici being partnered by Calderdale veteran Dote. 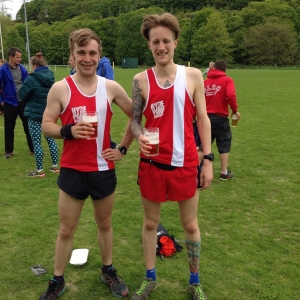 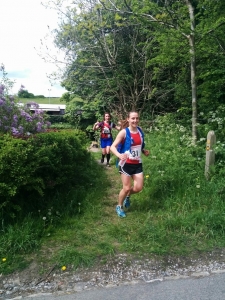 The final leg of the relay takes in some pretty tough climbs through woodland, and some nice and flat scenic sections of canal to the finish back at West Vale.  Mick and John, who completed their last recce in the dark at 9:30pm- made it to the end of the 17km route, with a powerful sprint finish, coming in at 2:13.  Clare and Helen completed the relay for the first all ladies HPH CWR team, with an excellent 1:58 finishing time, whilst Phil and Alec clawed back 3 places for the C team, crossing the line with a combined team time of 6:48:40.

The C team claimed our highest ever finishing position, breaking 3 HPH leg records, to finish in 11th place, 15 minutes quicker than last year.  Disorientated through fatigue and joy, Phil was later rebuffed at the bar for trying to use his race number as currency.

An excellent day in the South Pennines for Hyde Park Harriers- see you all next year.