Coiners, the start of the club Fell championship and my first ever blog, coincidence? Yes, no one else wanted to write it.

A few of us arrived early, time Rick used wisely by hanging around to make sure he picked up race number 60. In case you hadn’t heard, that’s also his age. Basking in the sun resplendent in our red and white, relatively new members Tom and Becca came to introduce themselves. Turns out they’re pros at this fell running lark.

Given the blistering heat the requirement for full fell kit was thankfully relaxed. The race leaves the field and heads down a heavily potholed road at pace as everyone tries to get near the front before a stile queue. I remember thinking how embarrassing it would be to trip over on a road before reaching the fell and wondering if they ban you from fell running for that. Whilst well known for his sprint finishes Matty seemed to have decided to go for a sprint start this time, level pegging with the Robin’s and I up to the stile and hot on Becky’s heals. At least until one of them queue jumped, but it’s ok, I won’t say who, it’s been 4 weeks and I have forgiven them.

Next up is a walk uphill through a forest, but it’s ok I can see the light at the top and I’ll be able to run when I get there. Nope. Finally, it flattens off a little and we get some proper tracks and I get to run, passing some pensioners and eventually chasing down the Robin’s on the climb to Stoodley Pike. A quick lap around the monument and then it’s slightly downhill across rough grassland into a forest. The forest was hilarious, really uneven and surprisingly boggy considering it hadn’t rained in weeks. The occasional fallen branches blocking the path added to the fun. Finally, the forest ended and it was out onto, well, exactly the same boggy tufty grass, but at least now there was a view as well.

Usually a road leg would be a nice recovery but with the midday heat and no breeze I was cooking. But it’s ok, next there was more tufty boggy grass. Running involved hopping from dry tuft of grass to dry tuft of grass, until I missed and sank up to my waist in the bog. Not so much gnarly mountain man, more vicar of Dibley.

I dragged myself out of the bog one leg at a time, careful to keep my shoes. At least finally I was cool, well half of me was. The rest of the race was actually fairly run-able until the steep downhill over the last kilometre where, true to form various pensioners came skipping past me. The steep downhill finishing funnel required early braking to prevent collisions.

At the finish I found Tom, Chris and Becky waiting, having finished in that order. We were soon joined by Robin and Becca in quick succession. Next up Jo passed Rick on the finishing straight, much to his chagrin having spent 6 miles getting in front. Apparently he lost 30seconds admiring the view at Stoodley Pike having waited 10 years to get there. Apparently Matty did a sprint finish to beat an M50 but I missed it cowering in the shade guzzling water.

Rick Pullan 4/5: ”I enjoyed it in a perverse way. My favourite word today was “shit” which I used liberally every time something took me by Surprise, which was most of the time.”

Rebecca Gray 5/5: “Not just the worst race ever but the worst experience of my life 😝 I will never complain about rain or cold at races ever again!” would recommend it to a “friend”

Garmin 5/5: “Overreaching. This activity was very demanding. While it can significantly improve your cardiorespiratory fitness, it can become harmful without enough recovery time and should be done sparingly.” Would do again. 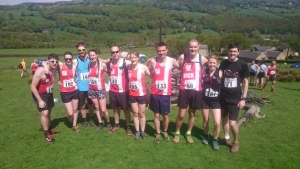