With both the Women’s and Men’s Fell Championship winners still to be decided, Hyde Park Harriers took to the hills for the final race of the season, enjoying a brutal 10km slog around Ilkley Moor.  The amount of mud on the course, coupled with high winds, and 400m of ascent made this the toughest challenge yet in the HPH Club Championship. 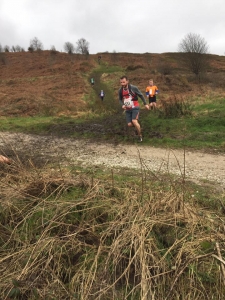 In the Ladies Championship, Robin was hoping to build on her runners-up trophy from last year, but a late point surge from Jo Rhodes at Burley Moor, and Mytholmroyd, meant that a strong performance was needed to clinch the title.

The Men’s Championship was the closest in the last five years, with a single point separating Scott, Jimmy and Colin.  We’ve had 7 different male winners of races this year, making it the most competitive season yet. 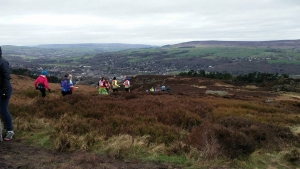 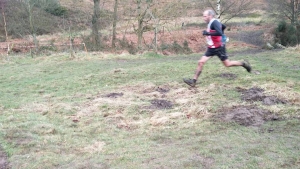 Eleven Hyde Park Harriers started the race, beginning on the path just off Wells Road, with a steady climb up towards the Cow and Calf.  The route then turns back towards the centre of Rombalds Moor, dragging the runners around every crag, beck, and gully before hitting the Badger Stone.

On a sunny day, the last section of the race, would be a gentle downhill jog off the Moor to the finish.  Attempting a fast traverse off an extremely muddy Rombalds Moor in February, meant that this was the equivalent of a black diamond ski run, with runners taking elaborate dives into the bracken, mud, and heather. 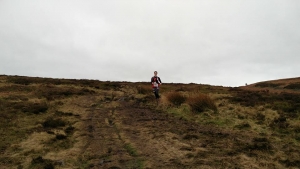 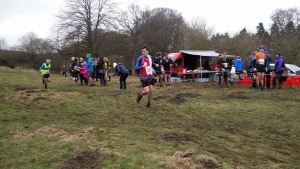 Although the race is ranked as difficult by fell running standards, several HPH runners decided that it wasn’t tough enough.  Matt Armstrong warmed up for the race with a full off-road marathon the day before, Graeme cycled 30km to get to the start, and Mike Vargas smashed out a 17:33 Parkrun on Saturday as a “leg-stretcher”.

The race was eventually won by Ilkleys Tom Adams, with Jimmy Sheldon crossing the line as first Hyde Park Harrier.  This gave Jimmy maximum points, pushing him just ahead of Scott to clinch the Men’s title for the first time.  A superb end to an epic battle for top spot, and well deserved silverware secured for both Jimmy and Scott. 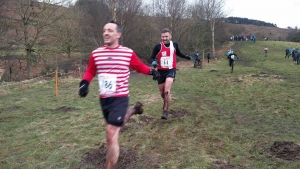 In the Ladies Championship, Robin finished strongly to take the trophy from last year’s winner, Becki- with 2nd spot going to Jo.  Along with Sam Scarlett, Jo seemingly only picked the hardest fell races of the year to take part in, tackling both Ilkley Moor, and Mytholmyod during the coldest months of the year! 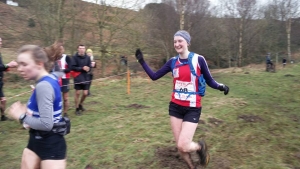 Well done to everyone that took part in today’s race, and the 9 other fell races in this year’s club championship.  There’s a real mixture of challenging and fun races in the calendar for next year, with a few new events to have a go at as well.  If it’s anything like this year- it’s well worth getting involved.

I’ve updated the Fell League standings based on these results.