So I’d only landed in the USA 24 hours ago before finding this gem of a running club in Columbus, Indiana. I popped into the white river running club after work to find out about some good local running routes before immediately being invited to join them that evening for their shop run.

I rushed back to the hotel, grabbed my trainers and set off back to join them. This week they had a local Hoka running shoe rep joining who brought dozens of pairs of demo shoes to try out. I swapped my Asics for a pair of Hoka Clifton’s, their most popular midrange shoe for the evening.

The group meet at the shop every Thursday at 6 and the organisers post two optional runs on a TV, a 3mile and 5mile. After a bit of chatting and a briefing, we set off in 28°c heat with no lead runner, but naturally forming small groups of similar paces.

This week was slightly different with the route going through town on the streets rather than along the river due to worries about recent flooding the week before affecting the paths. I didn’t mind as it meant I had a guided tour of the town’s lovely architecture.

The Hoka’s were great, very lightweight and very cushioned with a slight lean which stopped you feeling like the padding would absorb all your momentum. In the end I couldn’t resist, figuring I needed a new pair in the next few months, so why not try a new

I’ll definitely join the group when I’m next in town on Thursday in a few weeks, hopefully this time we’ll run along the white river wearing my HPH vest!. 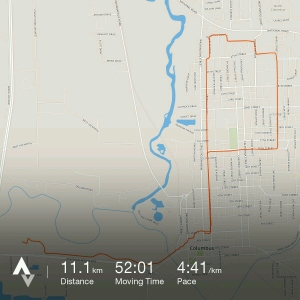