My friend Lauren who, like me, was training for London marathon at the time told me about a fabled marathon the Marathon du Medoc – http://www.marathondumedoc.com in the south of France where they give you wine every mile and described as “Le marathon le plus long du Monde” or “The longest marathon in the world”. “Ridiculous” I thought – a marathon is hard enough, withouth the added challenge of wine as you plod your way through 26.2 miles. However, my curiousity had been piqued and from a bit of research this relatively small (c9000 entrants) marathon has a bit of a cult following and is much more of a party and a celebration than a course to be run for a PB (although it’s worth noting that if you are first male or female finisher the prize is your body weight in wine!).

The biggest challenge for me was to find someone brave/daft/adventurous enough to enter with me (I entered before I’d joined HPH!). So when out one night with my colleague Dave from our Birmingham office who hasn’t run a marathon, but has walked the Yorkshire 3 peaks in a suit carrying a brief case with a bottle of champagne and an umbrella I thought I’d try my skills of persuasion and he agreed. I checked the next morning he was still in agreement and booked our places before he could change his mind.

The marathon itself is in Paulliac which is a small town 45 mins drive north of Bordeaux. You can stay there which would make logistics on the day easier, but it books up fast and so we ended up staying in hotels in Bordeaux and taking the shuttle bus up to Paulliac on the day of the marathon – this did mean we didn’t get to enjoy the pre and after parties so it’s worth booking early if you want the full experience.

My initial plan was for us to fly out for 2 nights in Bordeaux, but Dave had other ideas and decided that a road trip with his friend Tom joining us for the ride was the best way to prepare and recover after running a marathon and so we added a night before in Nantes and a night after in Caen which actually worked out about the same cost as if we had flown and allowed for lots of sightseeing and adventures along the way.

My training mostly involved continuing with my running and getting up to around 19 miles a few weeks before. I had a few trials of running after a few drinks to see how my body would react along with park runs after a Friday night out.

The night before the race we’d made our way south through France and discovered we needed to get an unplanned ferry across towards Paulliac which was full of French men in their 60s who had run the marathon every year for the last 24 years and were sozzled on French wine and singing at the top of their voices in preparation for the race the next day!

We picked up our race numbers and drove through the beautiful vineyards back to our hotel to carb and wine load for the race the next day. In reterospect the late finish and French wine perhaps wasn’t my best pre-marathon prep, but I managed to get ready and get the guys into a taxi to take us to the 6.30am shuttle bus back to Paulliac.

Fancy dress is mandatory for this race and the theme this year was “dressed to the nines” so Dave in classic fashion was in his suit and I interpreted it as 999 and bought a police woman outfit (mainly I wanted something I was confident I would be able to run in without causing too much pain!).

We lined up on the starting line with an amazing display of acrobatics and an announcement that the “actual” start was 700m in from the initial start line! Tom, who had offered to look after my heavy rucksack with my post race change of clothes, was waiting with us at the start and for some reason still known only to him, decided despite no training, no marathon entry or number, no trainers and the fact he’d agreed to carry my bag he’d have a go at seeing if he could run the course.

We started off with a reasonable pace and hit the first refreshment point about 1k (as a French marathon we had KM markers instead of mile markers which seemed to make it pass quicker!) This provided us with delicious croissants. About 3k in we got to the first wine station which was a bit crazy trying to actually pick up a small cup with about one mouthful of red wine – we all toasted the first drink and continued at a steady pace through the next c10K.

I’m not sure when the walking started, but we got to a point where I think it was evidently more fun to take a leisurely stroll through the beautiful vineyards, than run for a particular time. We sampled at all the wine stations which also offered crisps, fig rolls, bananas, oranges, biscuits, apples and cake, danced with the bands and marvelled at all the costumes having a great time until we realised the sweep car had just pulled up behind us – the 6 hour 30 minute cut off had initially seemed generous next to my marathon PB at London this year of 4 hours 9 minutes.

The remaining 10 – 15K passed by as a battle against the sweep vehicle that moved rather too rapidly for my liking and was manned by people dressed as clowns squeaking horns – like something out of a horror film! I had an energy boost when we hit the oyster refreshment point (Surprisingly delicious during race snack!) and was sad that the steak stand had already packed up by the time we got there! With about 10K to go I swapped my camelbak with Tom (who was still with us!) for my rucksack and all 3 of us crossed the finish line together in a time of 6 hours and 51 minutes and 49 seconds – a true personal worst for a marathon time! I usually finish around top 10 – 20% of ladies in races, but this time I was 924th female finisher of 950 in the bottom 3%, but I’m more than happy with the time.

Marathon du Medoc isn’t a PB course and it’s not a race where you end up “drunk” as the samples are tasters of wine rather than full glasses, but it’s a festival and celebration of the senses and probably my favourite race ever. The scenary was truly beautiful with vineyards and chateaus, the atmosphere was that of a carnival and party and the course was relatively flat and the organisation (other than the fact Tom managed to run a whole marathon without a race number and question from anyone!) was brilliant! I’ll be back again next year – who wants to join me? 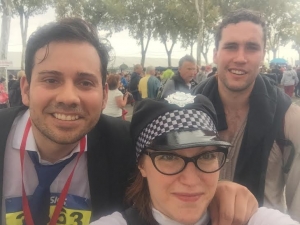