So you’ve reached a certain age, you may be starting to slow down or just getting into your running and may be wondering what is else is going on in the world of athletics!

I came back to running in 2010 aged 39 after a 15 year hiatus following a bad bout of glandular fever which wiped me out if I tried to run. The plan was to be fit enough to keep up with my son as he got older and because I always loved it to try and get back on the track.

I started with parkrun, however struggled to complete a 5k without walking but still got immersed in the social side and the camaraderie. An evening drinking wine and chatting with a fellow parkrunner online convinced me to enter a 10k (damn you online entries – so much easier to have second thoughts when you have to find a stamp and a postbox!!) and soon I’d even done a 10 mile race and a half marathon.

I am a middle packer – in most races I come 40-60% of the way through the field, and often lower! However I turn out for my club at track league matches and can fill in the gaps at anything – jumps, throws and any distance! The proverbial “Jack of all trades, Master of none!”

After regularly doing 5 or 6 events in a day at track league matches I discovered that I could do multi events as an individual through Northern Masters AC (other regional clubs are available!). I also ended up 3rd in the West Yorkshire Track and Field League last season (Seniors not Masters!) due to the fact I would do any event!

So what is Masters Athletics all about? Well put simply it is the chance for the 35+ runners to enter a unique set of competitions and join a community of their own. Road, Cross Country, Trail and Track and Field are all open to you if you sign up.

Do not worry – this is not an attempt to poach athletes from clubs – the majority of members join second claim not effecting their club affiliation. However, membership does give you British Masters affiliation and hence access to regional, national and international competitions!

So I entered my first national competition – the British Masters Pentathlon Championship down in Oxford last June. I can be honest and say there were only 2 in my age group, and I came second but it is not my fault if people do not choose to enter!! I won a silver medal, but had a great day’s competition and a fantastic time with a load of brilliant people over the age groups. I got hooked, and off the back of it entered my first British Masters Decathlon Champs.

Now this I loved – a few weeks before I got an email saying that the champs were also the biannual match between GB and the USA – I was competing with an American team and I have the T-Shirt to prove it!! What a blast!! I got 4 pb’s in a weekend and had an amazing time!! Oh, and I came 5th Brit and apparently ranked 35th in the world in my age group…..

Since then I have the rather unique achievement of winning a silver medal at the 5k trail running champs, gold at the 400m hurdles and high jump and also a silver at the 6 mile cross country!! But the best was still to come……

Shortly after coming 331st in my local cross country league I took off to Madrid to compete in the European Masters indoor track championships.  I entered the Pentathlon (60m Hurdles, Long Jump, Shot Putt, High Jump then a 1000m) after coming 3rd in the British Champs in London. Out of 44 entered I was ranked 40th prior to the event……

What a buzz to see your name on the scoreboard with “Great Britain and N Ireland” after it with a Union Jack flag. To hear your name announced for Great Britain and to see the pictures of yourself running in the GB Masters kit!  And what a fantastic bunch of people I met over there – in my event and around the stadium!! 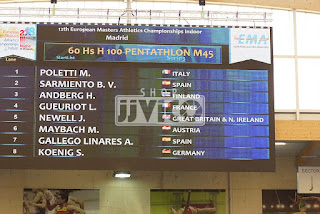 I finished up 33rd overall with 2 pb’s, in an event that lasted 9 hours but ended up with me running a 4 second PB in possibly my best track race for 25 years, the 1000m! I absolutely loved it, the buzz, the competition, the venue and the people…..

So why tell you about this? If I hadn’t found out about Masters Athletics I could not have had this experience. Afterwards my post on Facebook got more reactions than the amazing parent’s evening my boy Jamie had in his first year of high school and trust me that was unbelievable! So many great people with words of support and admiration – half of whom are old enough to join in and yet so many don’t!

In Masters athletics there are no minimum standards, no qualification and no reason to ever fear you are not good enough. It doesn’t have to be on the track – there are opportunities to run cross country, trail and road races too at any level! There are no younger athletes around to make you feel self conscious, just incredibly supportive (but competitive!) older folk just striving to compete or simply loving being there and participating!

So what do you fancy doing? The European Road running champs, the World Track Champs, International Cross Country, or the regional champs just to give it a try! Locations such as Torun in Poland, Venice and Toronto are coming up……. 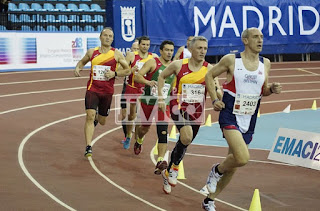 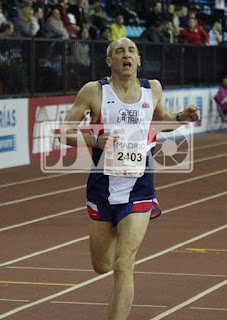