The final HPH Fell Championship race of the season was timed perfectly to coincide with a January snow blizzard, that submerged Penistone Hill Country Park in snow and ice.

Undeterred by weather of any kind, 10 Hyde Park Harriers took part in the Stanbury Splash title decider. In the ladies championship, Becky needed a win to grab maximum championship points, whilst, in the mens championship, one wrong turn by Dan Cross could see the fell title pass to Colin for the first time. 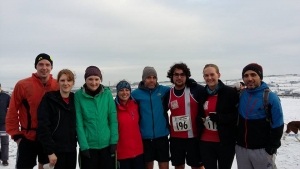 UK Athletics may (or may not) chose to investigate the pre-race trophy winning arrangements that were rumoured to have been discussed if Dan Waas failed to deliver Dan Cross to the race. Luckily for everyone involved, this murky business was put behind us when Dan made it to the start line, race ready, with 10 minutes to go.

The Stanbury Splash route was adjusted for safety reasons, which meant that we followed the route of The Stoop race, a distance reduction from 12km to 8km- missing out on some water crossings, and one of the best downhills in the fell championship. It was definitely the correct decision by the race organisers as the conditions were pretty treacherous on the moor.

Starting at the quarry bottom, the first half of the race before the climb up to Oxenhope Stoop, was a mixture of bridlepath and path, hard going in the cold conditions, but passable. The final 4km introduced ice-bogs, snow covered obstacles, and an increased possibility of perilous injury with every stride. 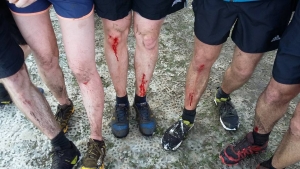 The HPH leading men swapped the lead on numerous occasions until the 150m decent towards Leeshaw water took out Dan Cross as he dropped and rolled on the slippery decent. Stan, in his last fell race before moving to Australia, took full advantage and powered on to finish top Harrier, in 21st place.

For the ladies, Rebecca put 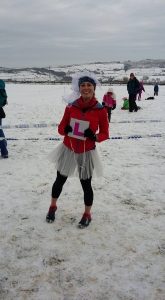 in another strong performance to finish in 49.02. Robins attempt to slow down Monica by loading her up with a selection of hen do accessories failed dramatically, as Monica flew round the course, just 11 seconds behind Becky.

A slightly less beardy Dan Waas was back on Haworth Moor for the first time since Withins Skyline, and in the face of icy danger, combatted fell running adversity with ingenuity, bravery, and strength. This was his 7th run in the HPH fell championship, missing just one race due to a PECO clash in December.

Just behind Dan, and in difficult conditions, Rici took 3 minutes off her previous Stanbury Splash time, completing the race in 58.37.

The HPH Fell Championship is decided on your best 5 races in a season, and the final race ended with Becky gaining a maximum 50 points in the ladies championship, and Dan Cross equalling last years tally of 49 points. Impressively, Robin matched Dan Waas for the number of races this year, and finished on 62 points, a record number of points in the HPH fell championship, but not quite enough wins to gain the title.

Out of 277 finishers, HPH results below: