Great racing conditions up on Withins moor for the annual Skyline fell race.  Clear blue sky and sunshine saw us off from the quarry start- but not quite enough sunshine to dry out a 3km stretch of bog that destroyed a pair of official “Ken Fox” branded Air Pegasus last year, and swallowed 40% of Stan. 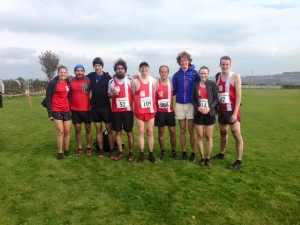 uckily Stan had new mud tolerant shoes for this years race, and he pushed Dan Cross all the way to an excellent 13th place finish (Stan finishing 15 seconds behind). Dans previous best time of 48:24 was smashed this year as he rolled in a very respectable 45:29.

The Withins Skyline race, covers about 10km of fell, over towards Top Withins (the supposed setting of Wuthering Heights), and back again. The way out features a steady but tricky climb over Haworth Moor. There’s a fair bit of uneven ground/bog during this part of the race, with Rachel having to slow up before the half way point due to some ankle twisting action.

The initial fast start of this race slows as the hills begin, with a single-file scramble over the moor which makes overtaking (and running at pace) a bit tricky. However, after an excellent Cardiff Half performance last week, Tom was back in action, showing his hill climbing prowess by charging up the 400m Harbour Hill and finishing in 50:46.

The route back, passes near to the Bronte Waterfalls and bridge, where the runners have to avoid tourist walkers on the look out for the tortured romantic hero Dan Waas.  His windswept, but resplendent beard, making him every bit- a wild man of the moors, as he powered round the course in just over an hour.

The faster second half of the race allowed Withins first-timer, Jimmy, to catch the injured Rachel right at the finish on Pennistone Hill, with an excellent time of 56:42. Ken and Chris, competing in this event for the second time, pitched in with respectable finishes- just ahead of HPH Ladies Fell Championship challenger, Robin.

An excellent turnout from HPH, and another fun day on the moors. 10 HPH runners altogether in 2015, 4 more than last year, and 6 up from the year before.

Out of 313 finishers, HPH results below: