I love running.  I love the Yorkshire 3 Peaks.  I love refuelling after a run with a massive pub meal more or less guilt free.  And of course I love running with all the awesome people at Hyde Park Harriers and so I was really pleased to be able to help combine all of these things in organising a celebratory HPH 10th birthday trip at the start of August.

I have walked the Yorkshire 3 Peaks mostly with my company, who every year send around 100 recruitment consultants up and down them to raise money for charity. I did this for the first time in 2010 and immediately couldn’t understand why I’d not ventured out to the Dales before – I was stunned at how gorgeous the scenery in our wonderful county can be.  Since then I have walked Y3P 5 times and run it twice as well as a few ad hoc jaunts for a few shorter run/walks.  I have usually done it the traditional way – Pen Y Ghent, Whernside and Ingleborough, but also in reverse and I hatched a plan for an unconventional (but hopefully quieter) route starting at Whernside (my least favourite) and then onto Ingleborough and finishing with Pen Y Ghent.
I wasn’t sure how many people would want to join me on this adventure at first, and whether we’d have fast or slower members so in the end I decided a run – walk approach would be best so that we could all enjoy it with an aim to getting around in 8 – 9 hours, well inside the 12 hour walking target.  I’ve got a good sense of direction if I’ve been somewhere a couple of times, and having run all 3 peaks more or less by myself with work in 2015  and then with Alan my  boyfriend this year (He encouraged me to reduce my previous best time to 5hrs 40….I was in pain for a long time afterwards!) I felt confident that I could navigate a group around Y3P without too many problems (plus my Garmin 920 forerunner has a handy – navigate back to start function!)
We had 12 assembled HPH who were all keen to conquer the 3 highest peaks in Yorkshire and we worked out car logistics and planned to set off from Leeds around 6am to get to the The Station Inn next to the base of Whernside for 8am!  I had pulled together a few hints of what to bring with us to make sure we were prepared for the task ahead – https://www.lostearthadventures.co.uk/blog/tips-tricks-yorkshire-three-peaks/ and also used a list of equipment from the White Rose Ultra which was a good kit list to use to make sure you have everything you could need.  I also bought a knee brace and first aid kit to take with me – just in case!
The evening before my Guide Leader brain set in and I kept thinking about all eventualities to make sure that we were well prepared and I looked at train times back to Ribblehead if we couldn’t get all the way around and printed off written instructions and maps for everyone and collated emergency contacts – fortunately we didn’t need to use any of these things!  I didn’t get much sleep as I’m always excited about a trip to the peaks as well as worrying about leading such a long route!
We all met up outside The Station Inn and Rachel Eales had made some awesome flapjack to get us/keep us going and we started jogging up my least favourite of the peaks – Whernside.  I like all of them, but Whernside is long and slow to get up and over, so getting it done first was a wise move.  The weather was fairly wet and misty so I was a bit worried about navigation…but we were up at the trig point within a good amount of time.
Descending Whernside was fun with more than one Harrier using their backside more that usual to descend a hill!  We all arrived down in one piece and I crossed my fingers firmly that the Philpin Lane cafe would be open… and it was so we were able to refuel on coffee, ice lollies and have a civilised pit stop!
We arrived at Ingleborough in good time and were up the steepest ascent as a group in good time even though some of the rocks were quite wet from the misty weather – the top of both Ingleborough and Whernside is usually a beautiful view, but we were a bit limited at this point until as we were descending back to Horton the sun started to creep out from behind the clouds.
Once you have descended Ingleborough there is usually a sense of elation on the traditional route – only 6 miles back to the finish…but we still had Pen Y Ghent to get on with!  We reached the toilets at Horton and filled up at the water tap and bumped into a chap that had been out on the Dales too, but had run all 3 peaks in just over 3 hours!
We headed up towards Pen Y Ghent and all had to de-robe as the sun came out in force and required sun lotion to be put on!  We got the views we were after at the top of Pen Y Ghent, stopped for another trig point photo and then made our way back to the pub for a “late” lunch.  The slog between Pen Y Ghent and Whernside is often a challenge as it’s nearly 10 miles, but we chatted, admired the views, took photos and counted down the distance with the longest parkrun ever “Only one more parkrun to go…”  .which ended up being around 8km!
All Harriers successfully returned to the start within 8 hours 55 and we all stuck together!  We then went into The Station Inn for a well earned meal, we all enjoyed the food, even if we were served by the most angry barmaid we’ve ever encountered!
I had a lovely day with a great group of people and I was most pleased that we all stuck together in a group, didn’t get lost and got around without injury in a good time with lots of chats, smiles and selfies.    Thanks to everyone who came and maybe we’ll do it again next year. 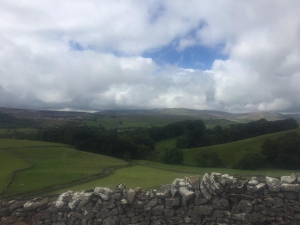 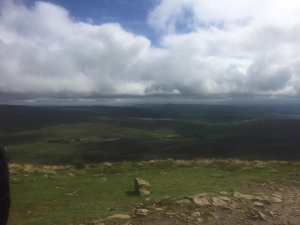 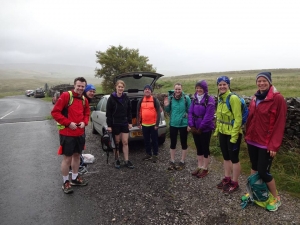 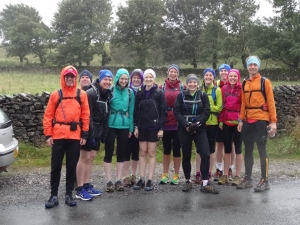 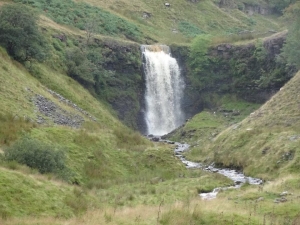 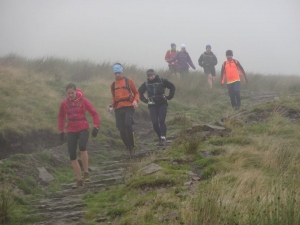 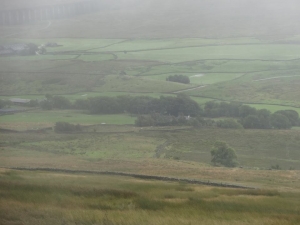 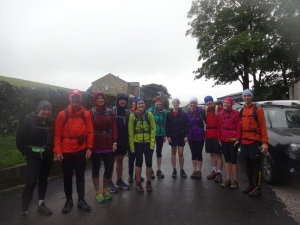 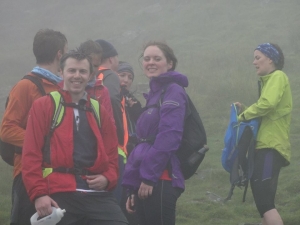 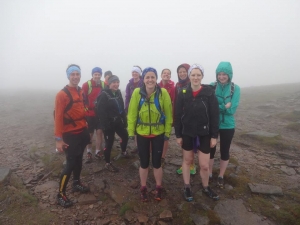 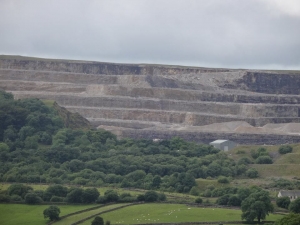 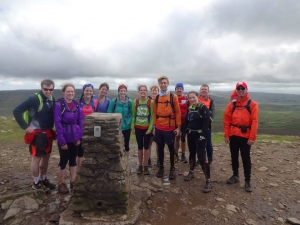